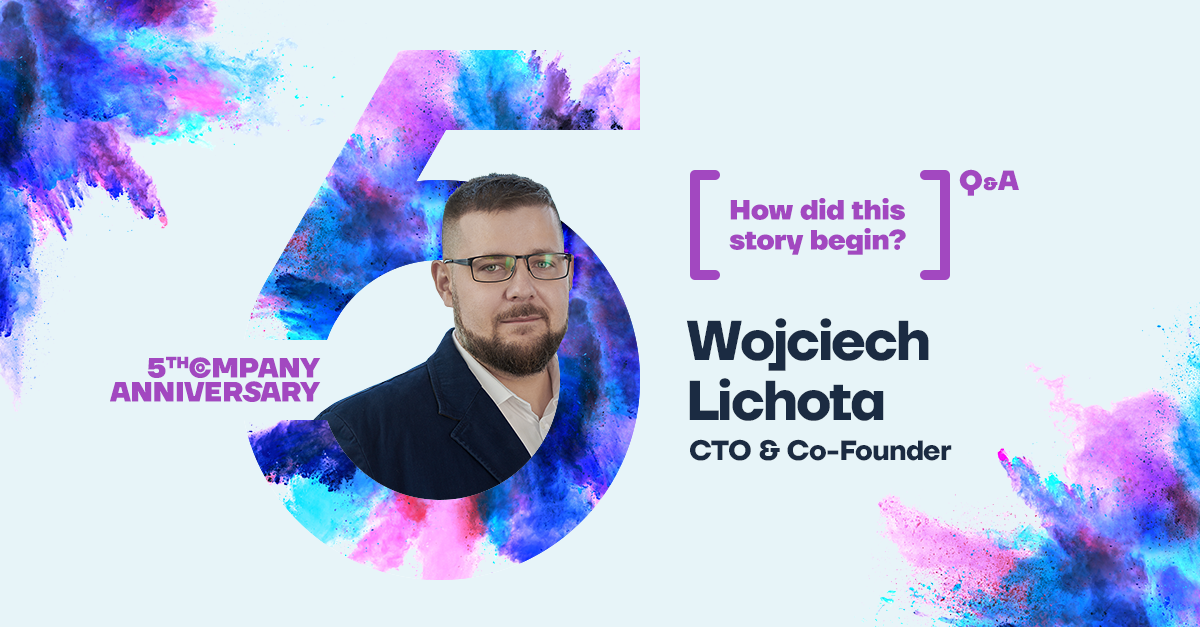 AdTonos has been around for 5 years. Today, we provide the best solution for audio ads used in the largest, most recognisable audio publishers like podcasts, audiobooks, gaming, music and radio streams across Europe, the United States, Asia, Africa and the LATAM.

The growing need for accessibility of audio ads means we need to perform faster and better than others. That is why we are successfully running a platform that handles:

Thanks to our robust technology, today brands have at their fingertips, an easy-to-reach audience of more than 272 million unique online audio listeners from not the UK but worldwide as well and the potential of at least 3 billion ad playouts a month.

Wojciech Lichota, CTO and Co-Founder of AdTonos, devoted a tremendous amount of time and work to build the AdTonos platform, which he and his team are continually developing and maintaining today.

For Wojciech, the story began over 3 years ago when he joined AdTonos and now we are asking him about how all this started and what it is like to develop such a large project.

Wojciech, how did your AdTonos journey start? How did the adventure begin for you?

I replied to a job advertisement posted by AdTonos, interestingly not for the CTO position, but for the role of ‘Head of Engineering’. What made me decide to join AdTonos? In Poland, what can often be noticed about startups and what they offer are rather simple applications, the application type such as CRUD.

AdTonos, on the other hand, was distinguished by the fact that it is more technically complex, it is a complicated and interesting thing we do. So I responded to the job listing and met with Michal, CEO & Founder of AdTonos, and we talked for over 2 hours. During the meeting, I learned that the position of CTO was available and this surprised me. Michal asked me an important question, if I could join full time. I decided to do so and it was more than I expected before going to the meeting.

What were the beginnings of the project like? What did you think you needed to do to get started with the project?

During my first year in the startup, CTO was also a programming role and so when I joined, we started developing the technology. The Minimum Visible Product (MVP) before launching the product was ready and it turned out that we were starting with the first implementation of Radio London. The deadline was very short, I had a month to get to know the system and prepare the first production implementation of the radio station. However, even though the MVP was ready, there was not a single integration and not a single listener. So it was a challenge to make it on time but I must admit that I managed. Finally, the implementation did not enter the market then, because the radio station went through the streaming provider. In contrast, the test was successful. This implementation showed us that the system needs to be changed from the monolithic side of the architecture.

What are the most significant milestones in the development of technology at AdTonos, in your opinion?

The next planned implementation was RMF, the largest Polish radio station, with enormous traffic and a significant number of listeners. To handle this deployment, we decided to rebuild the system architecture. I rewrote the architecture of the entire website to microservices. At that time, we wanted more commercials for RMF. In addition, we started the integration with the DSP Triton Digital platform, which allowed us to enter the open market in programmatic, and then we integrated AdForm. The rewriting of the system to microservices significantly facilitated the integration with DSP platforms.

The next milestone in our tech was opening up to VAST. We managed to write a VAST server, which means that we could handle all audio formats, not only radio stations. It was the biggest leap in technological development. A lot of new features were created on the platform and the possibility of increasing inventory by leaps and bounds opened up. And that’s all within my first year of joining AdTonos.

In September 2019, I joined as an employee. We started working on Aquaier and the Drumbeat module to integrate streaming providers and thousands of radio stations at the same time. We have also started work on the Yours Truly technology – interactive audio ads for smart speakers Alexa and Google Assistant,

In 2021, the platform grew by over 5 times and reached 272 million unique listeners per month, enabling the playouts of nearly 3 billion advertisements.

During these three years, what was the most difficult time for the business and for you personally? What was the biggest challenge?

The most difficult thing to do is to find the balance between time to market and doing something right, the way you want to. It would be nice to have more time for engineering and have a solution, but we would be in the market later. So you have to balance when to enter the market and focus on scaling later. How efficient does the platform have to be in order to enter the market with it and start scaling it?

This is the problem that I am concerned with all the time, from the beginning to the present day. You have to think about it and balance it all the time. On the one hand, we have the needs of the business team, and on the other hand, the developers want to do something that works properly and that the cost of scaling is not higher than doing it from the beginning.

Personally, the biggest challenge with such a large platform is the amount of work. You can’t only work 8 hours a day. There is no such thing as 5/7 in a startup, especially when you are a Co-Founder. You could work 24h / 24h. Also, finding time for the family, to rest or not to mention a hobby is a great challenge.

What brings you the most satisfaction in this project?

There is huge satisfaction because it is definitely the biggest project I’ve worked on in my career. And I have been working for several years, I have run many large projects for large corporations. But this one is definitely the biggest one, and most of the stuff on this project was either written by me or by the team that I lead. I created the vast majority of the code and I can sign it with pride.

Wojciech, tell us a little about yourself. What do you like to do when you take a break from work? Do you have any hobbies you’re passionate about?

I like to spend my free time with my family. As for my hobbies, I like electronics and I like to play with the soldering iron, creating new things. For example, I made some smart home sensors myself. We also run a YT channel with my sons about programming for children, which is a lot of fun for me and my sons.

How do I rest? My wife and I watch serials in order to forget about work for a moment. My favourite is Cassel. I also like listening to music. For work, it’s trance and electronic music, and when it comes to concerts, Polish rock performers: Pigama Prono, Jam, a lot. The energy is great, I have fun with this kind of music.

Let’s look to the future. How do you think the company and the project will change in the next five years?

We are sure to face another major architectural change in the system, i.e. the introduction of an OLAP database and event stream-processing, which will change the approach to architecture. We will also definitely increase the R&D team and expand the Development Center. This will be a big change that will have a significant impact on the project. I also want to expand the team with new roles that we don’t have yet. We will be moving towards team specialisation as the project is already big enough. We want to hire a Voice Interaction UX Designer or SRE.

How do you think the audio advertising technology will change in the coming years?

It will definitely be easier. Looking back a dozen or so years, and how you had to try to listen to music or digital audio, I remember cassette tapes, then the mp3, but you had to download them to your iPod. It’s getting easier to consume audio every year. This trend will continue and it will be easier and easier to consume audio over time. One button, one voice command and what I want to listen to, without searching, without installing anything extra. When you want to listen, you’ll have it ready right away. And if so, there will be more and more space for us to appear with our technology, to insert an advertisement.

What is your dream for AdTonos? What would you like to achieve in the future?

For the platform and AdTonos, I wish it would be the best project for Developers, for their development, to be technologically cool, using up-to-date technology, made in accordance with the standards, and to keep a great atmosphere in the team. Not only the biggest technology project but the coolest company, especially in terms of quality of the technology so that many more developers will come to us themselves, wanting to work for us.

We believe that Wojciech’s predictions and dreams will come true in the coming years, our project will continue to develop and grow beyond our imaginations. The next 5 years will be a great adventure in the world of audio advertising for our entire team.