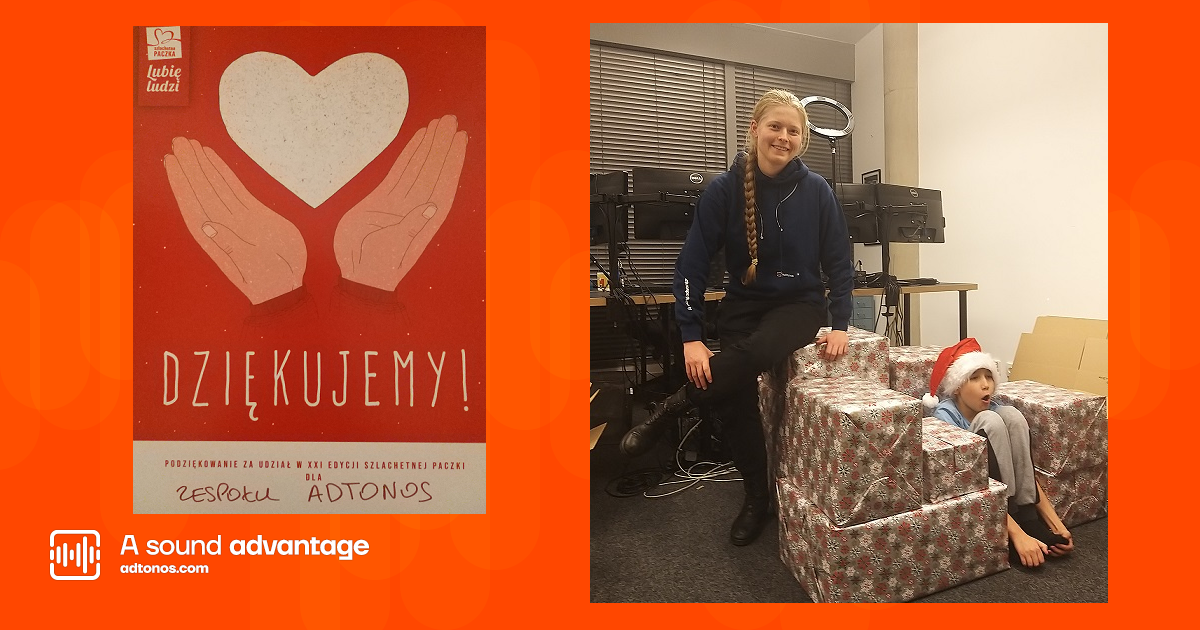 The holiday season is a time of giving, and in that spirit, the AdTonos team worked together to give back to the community by providing some special gifts to a family in need. In Poland, there is a charity organisation called Noble Package (Szlachetna Paczka) and they work to support families in need by connecting them with people who want to help. Every year, they organise what is called ‘A Weekend of Miracles’ before Christmas. This year it took place on the weekend of the 11th-12th of December and the AdTonos team took part by sending some ‘Noble Packages’ to Marta’s family, with 8 large packages that weighed a total of nearly 100 kg altogether, filled with essentials like clothes, food, cleaning supplies, as well as a bed. In addition to this, we also included a special surprise gift for Marta, a voucher for horse riding lessons.

We hope that this will make their lives a little easier and their Christmas a little more cheerful.

Our team decided that as a company we could take part in this fantastic charitable initiative and we could prepare gifts for one family in need. The idea was that during AdTonos Winter MeetUp, everyone will have a possibility to throw donations into a prepared Christmas Can and Radio Net Media will match the donation of the company as well to ensure that we provide this family with everything on their wishlist.

The Family We Chose

The family we chose to support is the family of Marta (mother), her husband Łukasz (father), and their two sons Marcin and Sebastian. Marcin and Sebastian are both disabled and before the pandemic, Marta and Łukasz both had jobs. They supported their family and dealt with everyday problems but unfortunately, due to the pandemic, the lives of their family changed dramatically. Both Marta and her husband lost their jobs. As if that wasn’t enough, Marta found out she had cancer. As she is currently undergoing chemotherapy, she has been unable to find a new job and her husband Łukasz is actively looking for a new job. Their older son, Sebastian, just went to university.

They are a wonderful family who loves and support each other and they have fallen on hard times. It is admirable that the family, despite their financial struggles, are still optimistic for their future and the AdTonos team was inspired by their spirit. Marta is an active member and volunteer of a local charity that takes care of disabled children and her two sons often help to organise meetings. Łukasz is a DIY enthusiast and he loves to deal with electrics. Their older son currently studies chemistry and he is very committed and likes to learn. Their younger son is training to become a chef, and he loves to cook. At home, he helps his mother a lot with taking care of the household.

Their key needs are a bed, a washing machine and food.

Oliwia, our amazing and invaluable assistant, spent two days shopping, buying jackets, shoes, backpacks, towels, cleaning supplies and groceries for Marta’s family with the donations from the team. Oliwia then kindly gathered it in our office in Gdynia. It was a tremendous job to get it all done so quickly. She also ordered a bed, according to what the selected family needed.

On Friday afternoon, Kasia and her son Dawid joined Oliwia and packing the products was in full swing. We wrapped the packed parcels with Christmas themes wrapping paper. It was also necessary to take the elevator to the parking lot and put it in the car.

Delivery to the Centre

It was already evening, and time was moving quickly because the foundation collected parcels from donors until nine in the evening on Friday. Thankfully, Kasia arrived at the logistics centre just in time with all of the gifts. A kind volunteer helped unpack the packages from the car and our parcels stood on a pallet at 20:45 pm. Our 3-person team of packers were tired but thrilled to be helping a wonderful family.

A volunteer from the Noble Parcel Foundation called us on Sunday, they were happy and very excited. She confirmed that our package was delivered to Martas’ family and said

“I had not seen such a happy family for a long time and that when they opened the parcels and Marta was very touched and thanked the volunteer when she saw the horse riding classes voucher. She said that we had made her dream come true and she told us(the charity) to call us(the donors) and say that they never expected such a package in their lives! They also thanked us very much and wish everyone Merry Christmas! The volunteer also said that it is rare to find donors so committed to fulfilling every single request of the family as best they can.”

Thank you to the AdTonos Team who donated to the Noble Parcel: Magdalena, Nida, Ella, Oliwia, Kasia, Paul and Paul, Wojciech, Michał and Michał and Michał, Piotr, Robert and Jakub. Thank you Oliwia for buying the goods and Kasia and Dawid for helping to pack the packages.

A special thanks to our guests who contributed money to the Notable Package during our meeting for the AdTonos Winter MeetUp: Johaness, Hossein, Maciej and Tomasz, thank you very much!